It’s been 5 years already. Lucy and Sasha met after the high-profile finale of their favorite series

Reunited and it feels so good! Lucy Hale and Sasha Pieterse met up and snapped a nice selfie together on Saturday, November 26. The actresses had starred in the teen drama Pretty Little Liars together from 2010 to 2017, and the photo marked a reunion about five years after the series concluded.

Both the Ragdoll actress and Dancing With The Stars alum looked like they were having a great time in the Instagram photo.

Lucy, 33, shared the photo of the two of them. Both she and Sasha, 26, leaned in together for the pic. Lucy stunned in a beige, fur coat and had her hair parted down the middle. Sasha rocked a black jacket, and a matching Adidas cap. While it’s not clear when the last time the two hung out was, the Fantasy Island star did say that it had been some time. “It’s been years since I’ve had a Sasha Pieterse fix. She’s as wonderful as ever,” she wrote in the caption with a white heart. 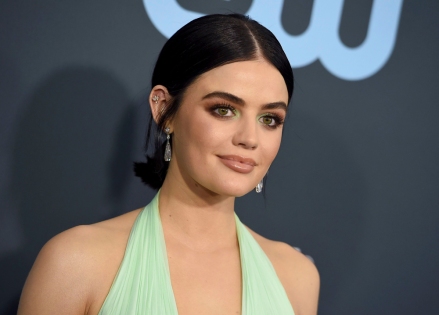 Sasha also shared her excitement about their reunion. She commented “Love you” on Lucy’s post and she included the selfie in a photo dump and raved about seeing her former co-star in the caption. “So happy I got to see this babe today, Lucy Hale,” she wrote on Instagram. Similarly, Lucy wrote “Love you girl” on the post. Beside the selfie with Lucy, Sasha also included a number of shots of her husband Hudson Sheaffer and son Hendrix Wade in the photo series. Lucy married Hudson in 2018, and she gave birth to their boy in 2020. She spoke about how happy she is with her loved ones. “Photo dump, better late than never! So grateful for my little crew. Our life is crazy and chaotic but equally peaceful and beautiful and I wouldn’t trade it for the world. My home, my happy place, my people. Thankful for our families and the family we choose, health and love,” she wrote. It seemed like the day together was a joyous and relaxing moment for both of the women. Lucy has had a busy year, starring in a few different projects, including Big Gold Brick, Borrego, and The Storied Life of A.J. Fikry, which were all released this year, and she has three projects in post-production, per IMDb. Sasha also starred in two Ivy + Bean films for Netflix this year.